Digital Pathology: What Does the Future Hold?

It’s no secret that digital pathology’s efforts to integrate itself into clinical diagnosis have been met with difficulty in recent years. Whilst hospital departments like radiology and cardiology took up and embraced digital workflows long ago, pathology has had an unusually long journey to digitalisation.

There are unique circumstances causing this, including a combination of over-regulation, tight reimbursement, and a lack of evidence for tangible cost savings. However, even despite this, pathology’s dwindling workforce and increasing caseloads have always made the case for digitisation seem inevitable.

Over the years many have wondered what it would take for the market to finally see the light and digitise – the answer is, apparently, a viral pandemic.

At first, when COVID-19 hit and stay-at-home orders were enacted, the outlook for the market was dire.

As hospitals promptly closed all doors and sales conversations were halted, vendors began to worry. This was compounded by logistical disruptions when deploying scanners, with increasing delays seen in implementation as healthcare sequestered resources.

Whilst a small preclinical demand windfall mitigated the initial clinical slow-down, the overall effect was that in the early days of the pandemic declines were projected across most segments and geographies.

However, as stay-at-home orders were extended and the pandemic continued, digitisation in the pathology lab saw a sudden surge in interest. Early on the FDA issued a waiver, allowing pathologists to conduct primary reads from home and loosening restrictions on software-hardware approvals. This resulted in a surge of clinical pathology adoption, as labs were suddenly able to resume work from home.

The culmination of this was a market which saw growth 40.9% growth YOY, with many vendors reporting record sales, as shown in Figure 1.

Following extensive interviews with industry vendors, it’s clear that for the next five years market sentiment is expected to remain strong.

Whilst progress will be felt differently depending on individual geographies and product segments, recent events highlighting the benefits of digitisation mean that whether another wave (or new pandemic) does appear, pathology is not prepared to be caught unaware for a second time.

However, whilst the necessity for digitisation is now clear, many challenges that previous inhibited adoption in the market still exist today, as shown in Table 1. 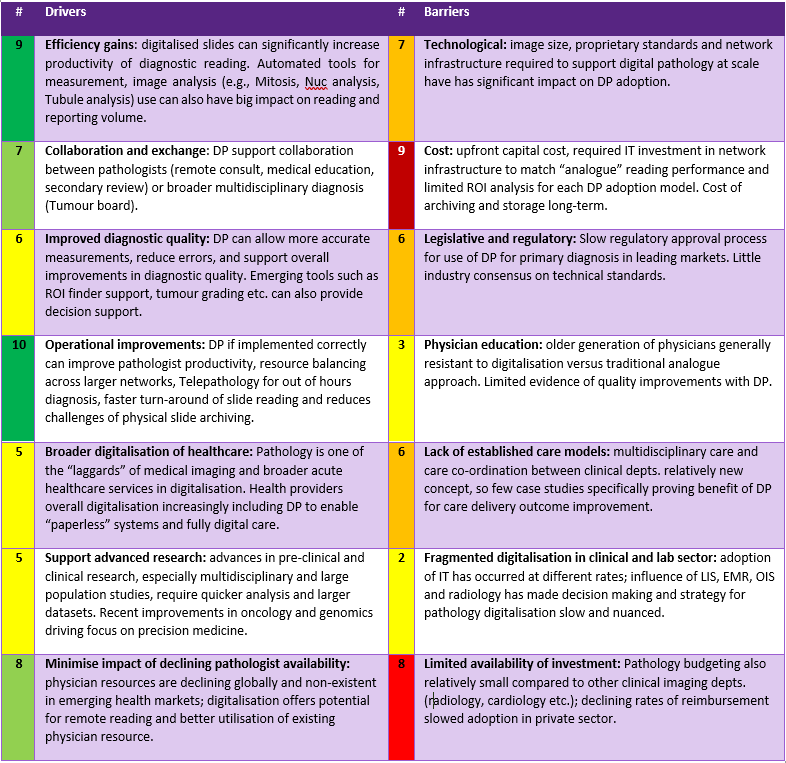 Whilst these challenges are expected to continue and significantly impact the market in the years ahead, new momentum brought about by the pandemic has increased stakeholder engagement and desire to help address and overcome these issues.

Previously the digital pathology market was dominated by coupled hardware-software sales, which offered competitive pricing for early adopters. This often resulted in a reduced focus on the software segment, which was often over-discounted in larger deals. As adoption increases, we expect this to shift rapidly.

Best-of-Breed (BOB) “open” platform software vendors like Proscia, Inspirata and Tribun saw strong growth throughout the pandemic. This was driven by demand for premium functionalities from early adopters who suddenly needed to scale quickly and customise workflows across multiple sites.

Whilst historically interest in BOB software was stronger in Europe due to less stringent regulations, the US FDA’s waiver issued in April 2020 removed the requirement for pathology software attachment to a specific scanner model. This rapidly opened the market and allowed for unprecedented growth.

In response, we expect several smaller vendors to begin expanding beyond their domestic markets and into the US. This will help to both drive competition and increase innovation. The software segment is projected to constitute 38.3% of total revenues in 2025 (see table 1).

Funding and the Role of Enterprise Imaging

We also expect several new entrants into the digital pathology software market in the next few years. These will come from radiology IT as a result of the increasing inclusion of pathology in enterprise imaging deals.

Some vendors in the digital pathology market, such as Sectra and Fujifilm-Inspirata are already utilising this model, coupling radiology IT sales with Pathology in order to win new business.

There are several advantages to this approach, including allowing pathology departments to “piggy-back” on (usually larger) radiology budgets to help mitigate digitisation costs. This also benefits the wider hospital, as healthcare is increasingly transitioning towards multi-disciplinary care models.

Whilst there are relatively few examples of combined radiology and pathology sites operational using a combined platform for primary diagnostic use today, an increasing number of tenders are emerging which stipulate secondary clinical access to digital pathology data within radiology (and vice versa).

Some pessimists may caution that these enterprise imaging deals could potentially result in the minimisation of best of breed software. Chiefly this will depend on the approach new radiology IT entrants take. Considering the history of the market, and relatively nascent enterprise imaging trend, we at Signify would recommend radiology IT partnerships with BOB vendors as a low-risk method of entry, allaying concerns from purists and facilitating interconnectivity early on in digitisation.

Siloes and the Role of Operational Business Models

In concurrence with pathology-radiology adoption, will be the advent of digital pathology in more cost-constrained environments.

Significant costs associated with scanner purchases in recent years have acted to delay adopters who simply cannot afford investment in higher throughput models, limiting the use of digital technologies in these environments. In the future we expect an increasing number of alternative business models to emerge which will help to spread these costs over a managed period.

An example of this would be the model operated by vendor OptraScan, which recently announced a partnership with software vendor Inspirata which involves no upfront expenditure. The partnership also allows labs to streamline supply chains and reduce difficulties with integration. In summary: digitisation made simple with more predictable cost and a lower barrier to entry.

For the majority of clinical pathologists, who are just now being introduced to digital workflows, this approach can be much more attractive than combining integration with other departments.

The Future of the Market

It’s clear that Digital Pathology market has benefited enormously from the COVID-19 pandemic; however, much progress and innovation is yet to come.

As hospitals now begin truly considering how best to invest and scale digital pathology departments, we expect further questions will emerge surrounding storage models, AI integration and the role of standards. Whilst not all these can be covered in a single article, it’s clear that the market as a whole is set for an exciting few years ahead.

Signify Research is an independent supplier of market intelligence and consultancy to the global healthcare technology industry. Our clients include technology vendors, healthcare providers and payers, management consultants and investors.

For more information regarding Signify’s attendance at the  8th Digital Pathology and AI Congress: Europe please contact us here.