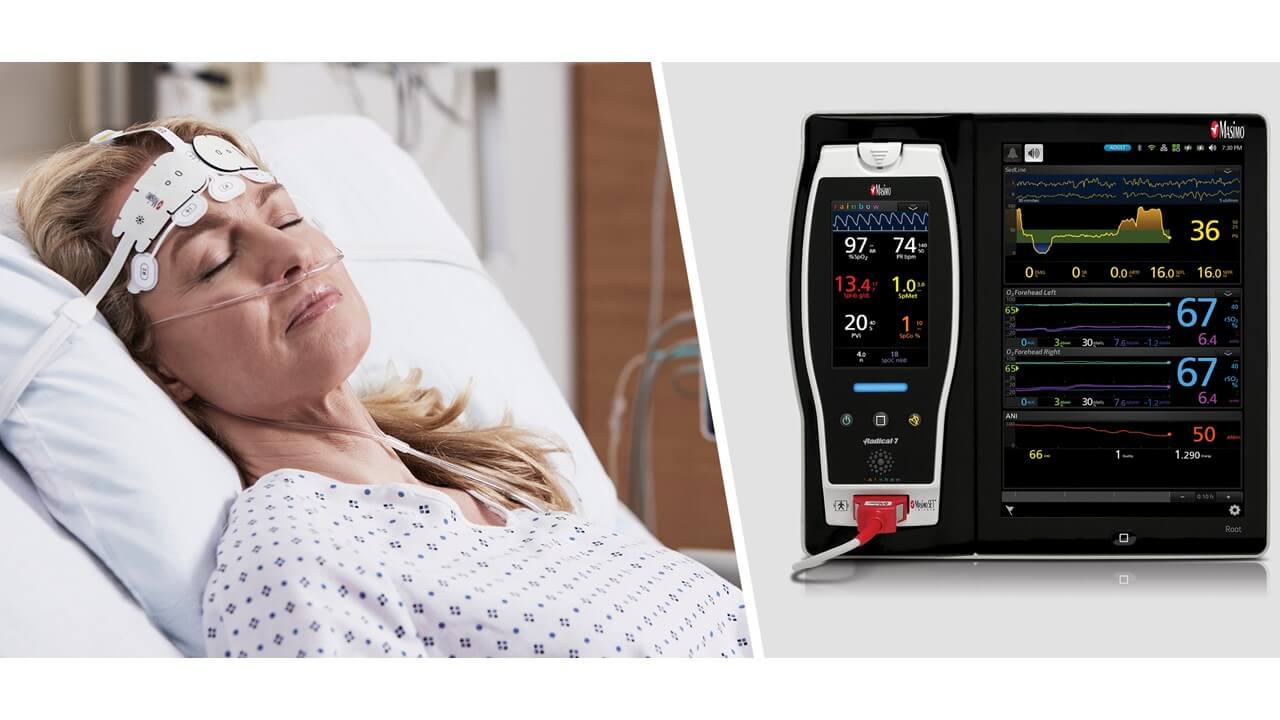 Masimo today announced the findings of a prospective study published in Frontiers in Aging Neuroscience in which Dr. Shuyi Yang and colleagues at Capital Medical University in Beijing investigated whether Masimo Root® with a multimodal brain monitoring algorithm to manage anesthesia during spinal surgery could improve postoperative cognitive function. In the first study of its kind, the algorithm incorporated measurements from Root, including Masimo SedLine® Brain Function Monitoring, Masimo O3® Regional Oximetry, and ANI® Analgesia Nociception Index. The researchers concluded that managing anesthesia based on the multimodal algorithm “may improve the post-operative cognitive function and brain function connectivity in elderly patients undergoing spinal surgery compared to routine anesthesia management.”1

Noting that perioperative neurocognitive disorder (PND) is common in elderly patients undergoing surgery, and that PND has been associated with levels of sedation, analgesia, and cerebral oxygen saturation, the researchers sought to evaluate whether use of an algorithm designed around related parameters could help improve this population’s postoperative neurocognition. They enrolled 26 patients aged ≥ 65 scheduled to undergo spinal surgery and divided them randomly into an intervention group (n=14) and a control group (n=12). In the intervention group, anesthesia was managed using the algorithm, which incorporated Sedline Patient State Index (PSi) and Spectral Edge Frequency (SEF), O3 regional cerebral oxygen saturation (rSO2), ANI pain index, mean arterial pressure (MAP), end-tidal CO2 (PETCO2), hemoglobin (Hb), and temperature. The control group received routine anesthesia management. To evaluate whether the algorithm improved cognitive function, they a) compared the patients’ Montreal Cognitive Assessment (MoCA) score before and 7 days after surgery, b) analyzed the amplitude of low-frequency fluctuation (ALFF) and brain functional connectivity (FC) after MRI, c) measured serum C-reactive protein (CRP) and lipopolysaccharide levels, and d) analyzed the correlation between FC and changes in inflammatory marker levels.

The authors concluded that “anesthesia management based on multimodal brain monitoring under general anesthesia may improve the postoperative cognitive function and brain function connectivity in elderly patients undergoing spinal surgery compared to routine anesthesia management, as evidenced by increased brain activity (ALFF), enhanced FC, higher MoCA score, and reduced systemic inflammation. The extent of postoperative systemic inflammation was negatively associated with the FC enhancement and may be accompanied by a lower MoCA score. Our findings provide a basis for more effective management of elderly patients who undergo surgery to reduce the risk of cognitive disorders and improve brain function.

Michael A.E. Ramsay, MD, FRCA, Chair Emeritus of the Department of Anesthesiology and Pain Management at Baylor University Medical Center, commented, “Postoperative neurocognitive disorders (PNDs) are commonly seen in elderly patients, and may be very distressing to the patient and family. This small, prospective, randomized clinical study has demonstrated that precision multimodal monitoring of the brain intraoperatively can result in significantly improved mental status of surgical patients postoperatively. The study patients were maintained at a precise depth of anesthesia, cerebral oxygenation, analgesia, and temperature using the Masimo Root monitor. Postoperatively the MoCA score was statistically higher (p < 0.04) in the study group and the inflammatory marker levels in the brain were significantly reduced (p < 0.05), as well as inflammatory markers systemically (p < 0.01). A MoCA score of 25-30 represents normal cognition and 21-24, 10-20, and 9 and below, mild, moderate, and severe cognitive impairment, respectively.”

Dr. Ramsay continued, “This was a well implemented study, and while it may have been small, it has large implications regarding the value of precision monitoring during surgery and with the potential for application in the intensive care unit (ICU). This may represent a vital advance in the prevention of PND and also the prevention of delirium in ICU patients. Larger studies will be needed to confirm these preliminary data.”

ANI on Masimo Root has not received FDA clearance and is not available for sale in the U.S.

Masimo is a medical technology company that develops and produces a wide array of monitoring technologies, including measurements, sensors, patient monitors, and automation and connectivity solutions. Our mission is to improve patient outcomes and reduce the cost of care. Masimo SET® Measure-through Motion and Low Perfusion™ pulse oximetry, introduced in 1995, has been shown in over 100 independent and objective studies to outperform other pulse oximetry technologies.2 Masimo SET® has also been shown to help clinicians reduce severe retinopathy of prematurity in neonates,3 improve CCHD screening in newborns,4 and, when used for continuous monitoring with Masimo Patient SafetyNet™ in post-surgical wards, reduce rapid response team activations, ICU transfers, and costs.5-8 Masimo SET® is estimated to be used on more than 200 million patients in leading hospitals and other healthcare settings around the world,9 and is the primary pulse oximetry at 9 of the top 10 hospitals as ranked in the 2021-22 U.S. News and World Report Best Hospitals Honor Roll.10 Masimo continues to refine SET® and in 2018, announced that SpO2 accuracy on RD SET® sensors during conditions of motion has been significantly improved, providing clinicians with even greater confidence that the SpO2 values they rely on accurately reflect a patient’s physiological status. In 2005, Masimo introduced rainbow® Pulse CO-Oximetry technology, allowing noninvasive and continuous monitoring of blood constituents that previously could only be measured invasively, including total hemoglobin (SpHb®), oxygen content (SpOC™), carboxyhemoglobin (SpCO®), methemoglobin (SpMet®), Pleth Variability Index (PVi®), RPVi™ (rainbow® PVi), and Oxygen Reserve Index (ORi™). In 2013, Masimo introduced the Root® Patient Monitoring and Connectivity Platform, built from the ground up to be as flexible and expandable as possible to facilitate the addition of other Masimo and third-party monitoring technologies; key Masimo additions include Next Generation SedLine® Brain Function Monitoring, O3® Regional Oximetry, and ISA™ Capnography with NomoLine® sampling lines. Masimo’s family of continuous and spot-check monitoring Pulse CO-Oximeters® includes devices designed for use in a variety of clinical and non-clinical scenarios, including tetherless, wearable technology, such as Radius-7® and Radius PPG™, portable devices like Rad-67®, fingertip pulse oximeters like MightySat® Rx, and devices available for use both in the hospital and at home, such as Rad-97®. Masimo hospital automation and connectivity solutions are centered around the Masimo Hospital Automation™ platform, and include Iris® Gateway, iSirona™, Patient SafetyNet, Replica™, Halo ION™, UniView®, UniView :60™, and Masimo SafetyNet™. Additional information about Masimo and its products may be found at www.masimo.com. Published clinical studies on Masimo products can be found at www.masimo.com/evidence/featured-studies/feature/.

ORi and RPVi have not received FDA 510(k) clearance and are not available for sale in the United States. The use of the trademark Patient SafetyNet is under license from University HealthSystem Consortium.